Throughout this project, research and design efforts prioritized the enhancement of an educational interactive documentary experience to help members of the greater Georgia Tech community learn about campus history. Before beginning any redesigns of the initial mobile prototype, several rounds of background research were conducted to gain more feedback about interactive storytelling, mobile usability, and multimedia learning.

“Think of your body in the space.” – Nonny de la Peña

In July 1964, Lester Maddox, owner of The Pickrick Cafeteria, shutdown the restaurant, rather than serve Black customers, along with supporting integrationists, under the desegregating provisions of the 1964 Civil Rights Act. After a series of protests and court rulings against the Pickrick Cafeteria, Georgia Tech purchased the restaurant in September 1965 with the intention of converting it into the Ajax Student Placement Center. The restaurant structure, built in 1947, was demolished in 2008. Remnants of the site are now memorialized as part of Georgia Tech’s EcoCommons, a performance landscape joining technology, ecology, and social experiences into a built space.

During this initial round of background research, IDNs categorized as Interactive Documentaries were used in reference to craft historical narratives of Black experience in the United States of America through virtually immersive means. In particular, I Am A Man and Traveling While Black are two virtual reality (VR) applications that use technology to construct cohesive multimedia narratives concentrating on the Black experience during the mid-20th century.

After receiving feedback from the focus group, six (6) general design priorities were categorized. User comments guided the identification of various pain points across the app relating to a lack of text visibility, excessively dense information architecture, as well as breaking points across immersive storytelling.

Before conducting a round of interviews to more specifically assess the prototype’s usability, a survey was generated for the purpose of gaining a broad perspective of community engagement with Civil Rights history, multimedia learning technologies, and gathering spaces around Georgia Tech’s campus. 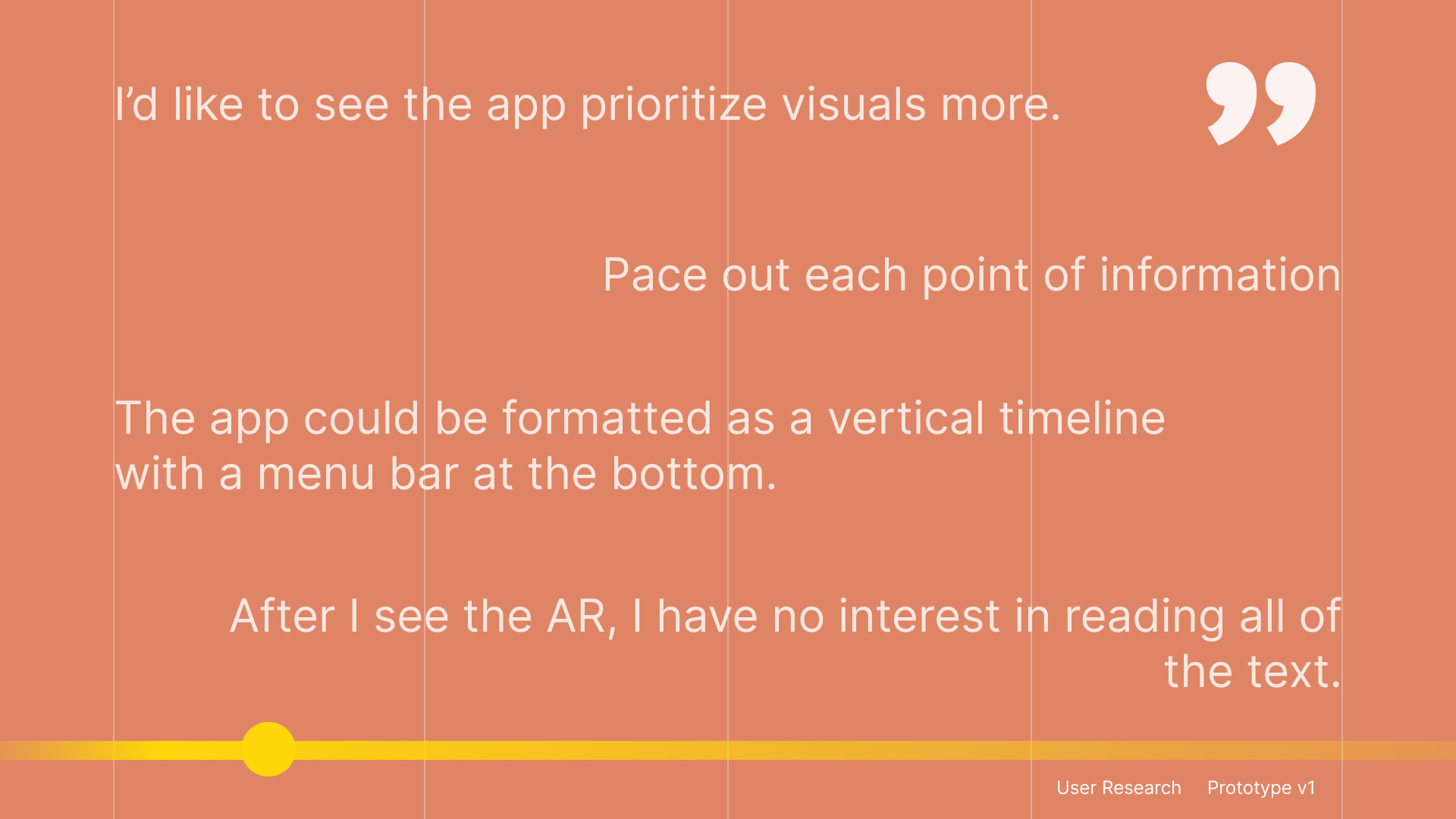 Instructional design became an important framework for exploring different techniques to curate a mobile learning experience across mediums (e.g. text, narration, augmented reality). With the goal of teaching target users about American History, it was equally as significant to understand how historic information is currently communicated across different spaces, especially within digital environments.

Through prior evaluation activities, a large amount of valuable feedback from users and experts regarding design pain points was received. Identifying these issues facilitated changes to improve overall aesthetic consistency, accessibility, and usability across the system’s interface. 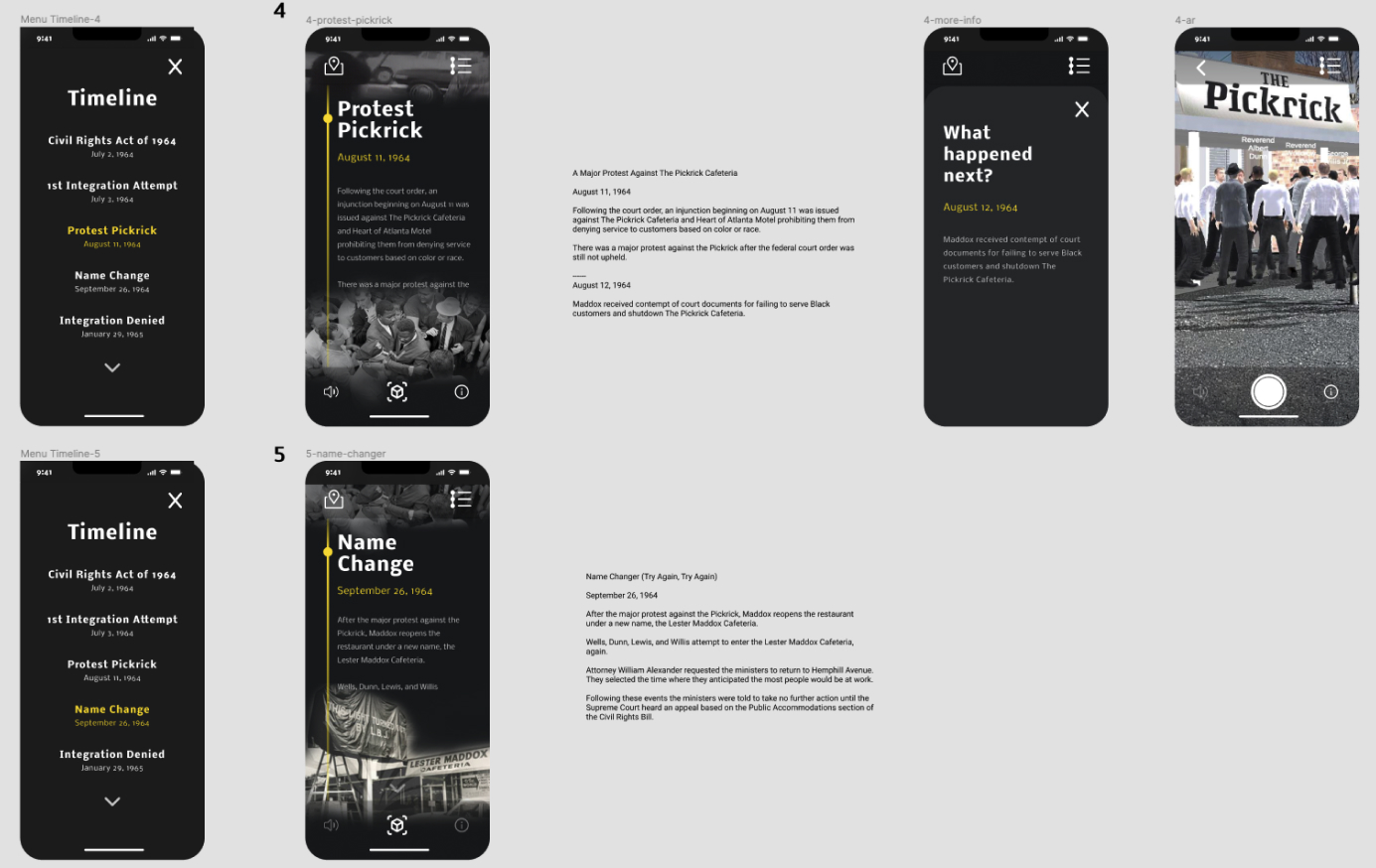 Clearly state the goal of the project 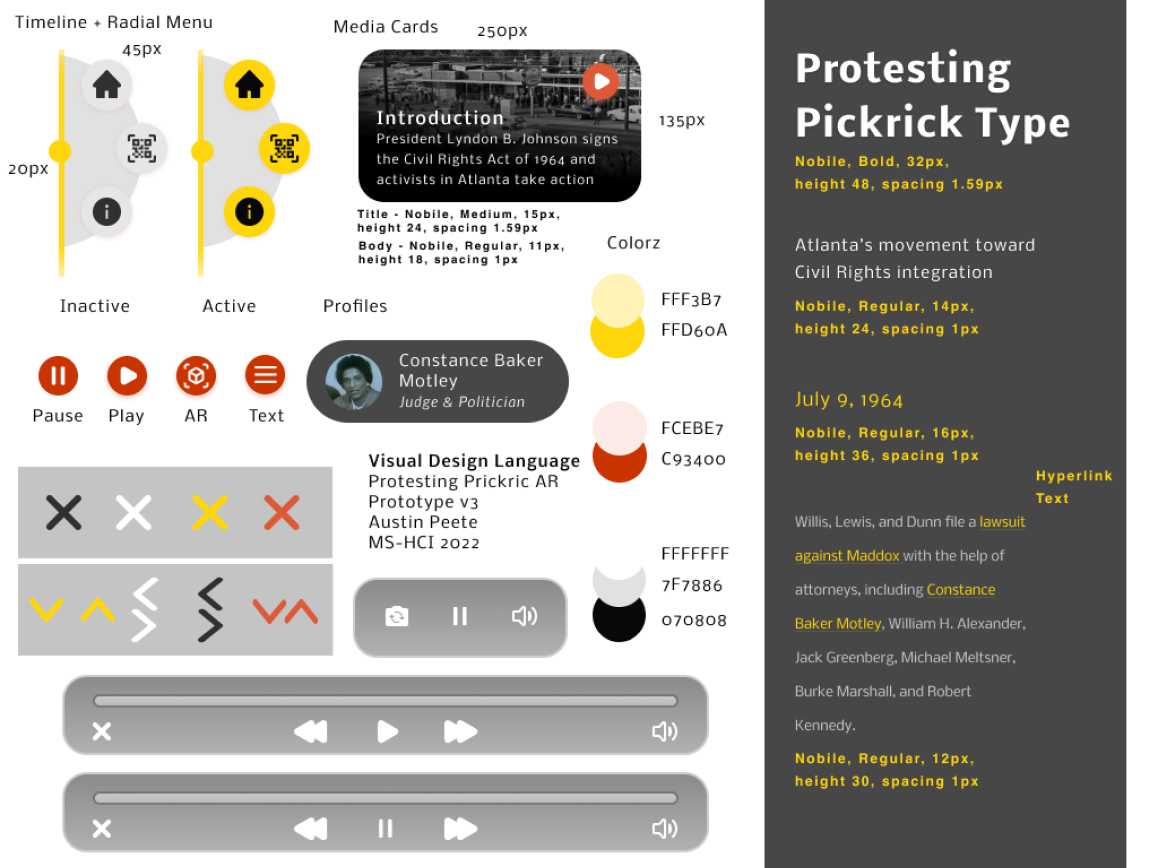 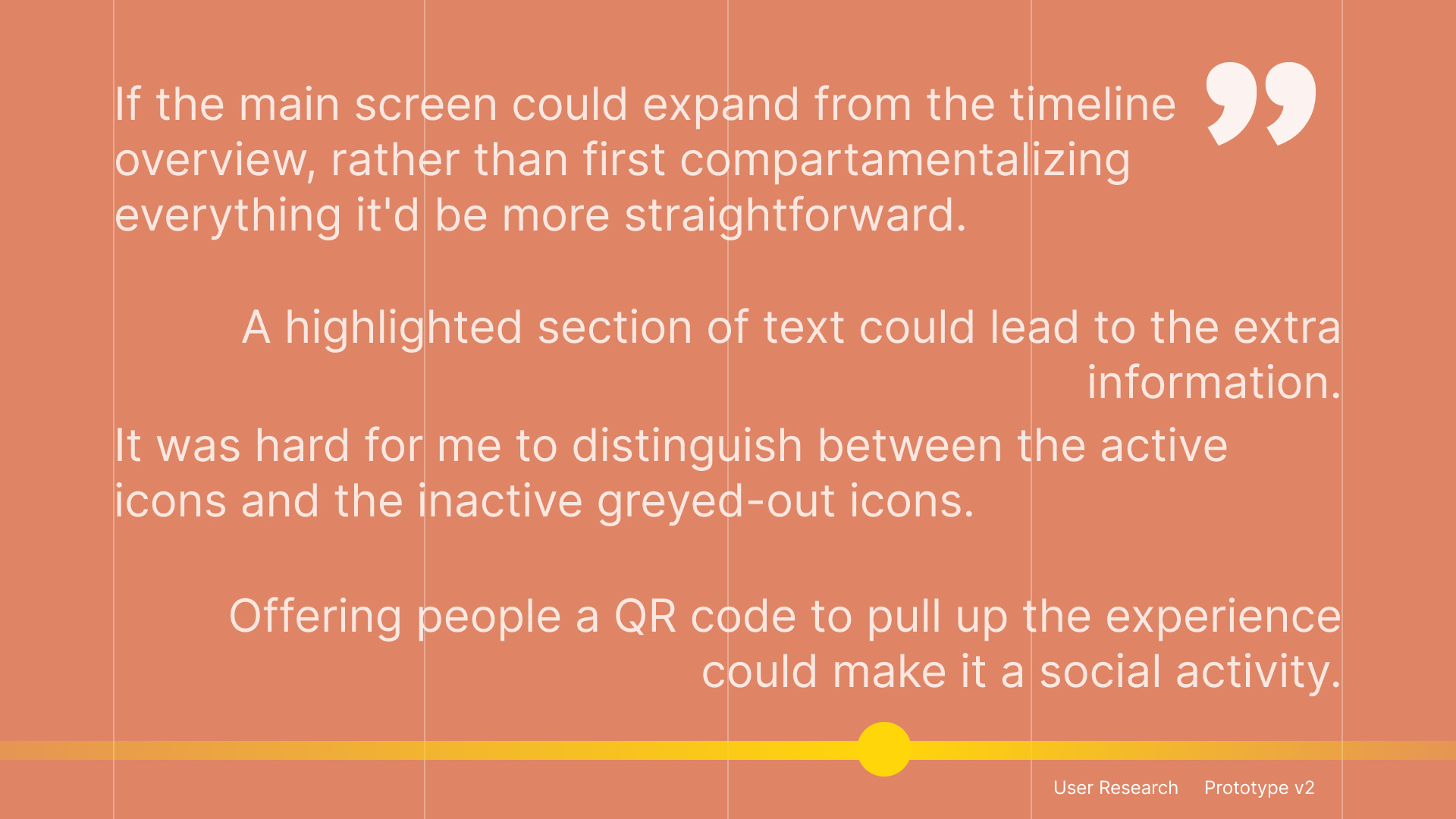 Generate a wide array of ideas

Personalization - People learn better from multimedia presentations when words are in conversational style rather than formal style.

Segmenting - People learn better when a multimedia message is presented in user-paced segments rather than as a continuous unit.

A critical point of feedback during prior user testing exposed that users were feeling overwhelmed by the amount of written information within the Pickrick AR prototype. One participant stated, “After I see the AR, I have no interest in reading all of the text.”

Critical pain points, such as this, resulted in an overhaul of narrative structure. Without shifting focus away from the Civil Rights activists, lessening historical accuracy of the narrative, or removing essential elements from the narrative, the second iteration of the Pickrick AR prototype also needed to significantly condense the storyline of protesting The Pickrick Cafeteria.

Based on user feedback, personas were created to project use cases across a variety of backgrounds relevant to this design solution's target demographic. The D4D framework provided reference for the generation of these personas by asking the leading question: “What’s the worst-case scenario, and on whom?” [7].

Two more leading questions that informed these personas include: 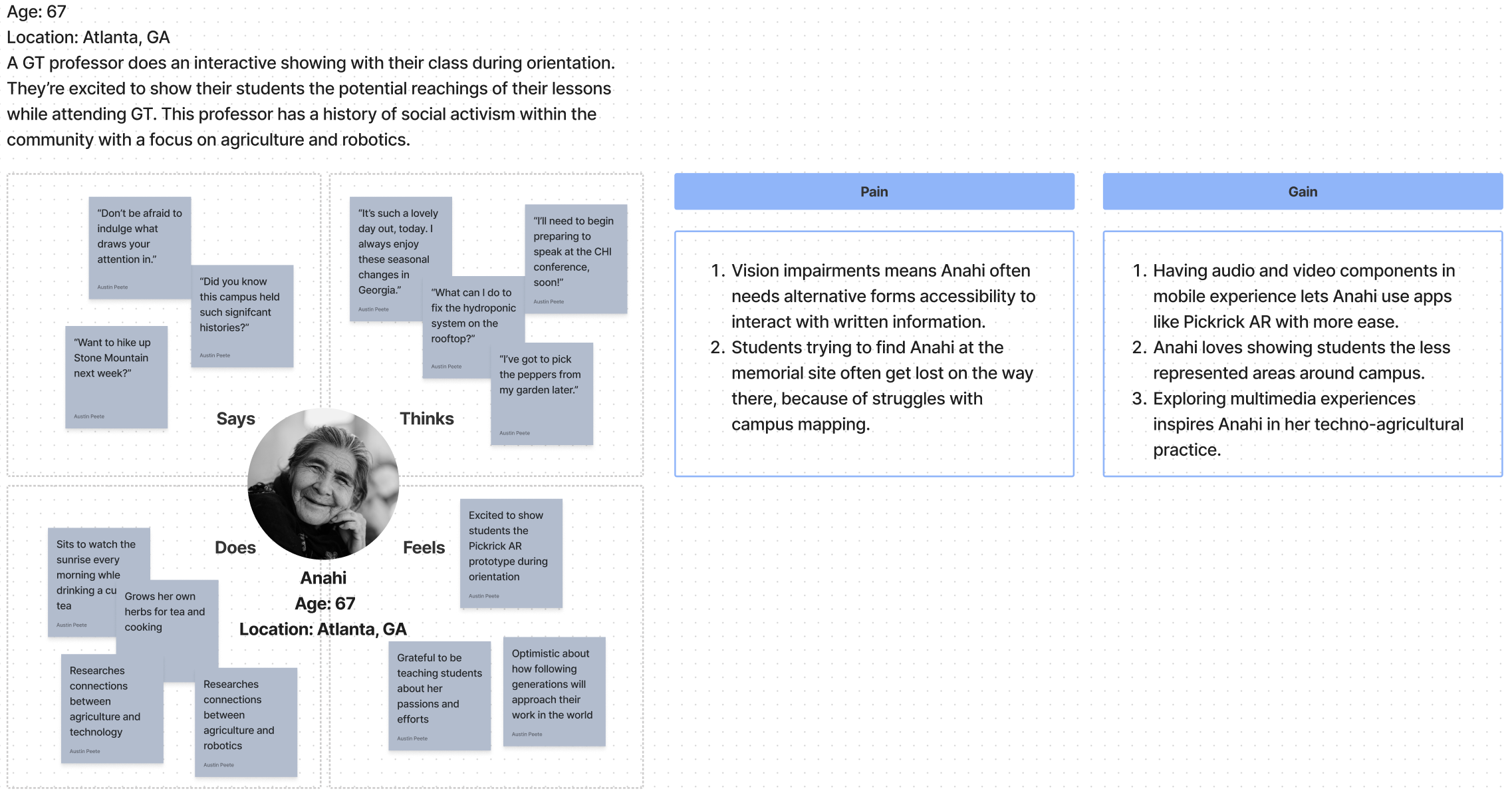 Prioritize what to focus on and why

By conducting another round of interviews, more specific aspects of the prototype’s usability were assessed in accordance with an updated criteria for design priorities. This round of user testing offered an opportunity to specify critiques of prototype features.

This redesign orients users toward an enhanced mobile experience that is rooted in the flow of a chronological timeline of historical events. Functionally, the system straddles user interactions between physical and virtual environments tethered to the space where these demonstrations actually happened.

Through a series of compartmentalized multimedia features, users can engage a hybrid educational experience while walking through Georgia Tech’s campus. There’s little to no precedent for engaging histories through the technologies that are gaining popularity today, such as AR. Users accessing these sorts of cultural, historical, and heritage experiences via mobile devices prefer to receive information in forms other than writing, such as imagery, video, or audio narration.

Work executed during this project is an effort to move away from standard dominant systems of storytelling. With the possibility of offering people agency through design, there persists the potential to reconcile shared experiences that come with translating these moments across communities, space, and time. 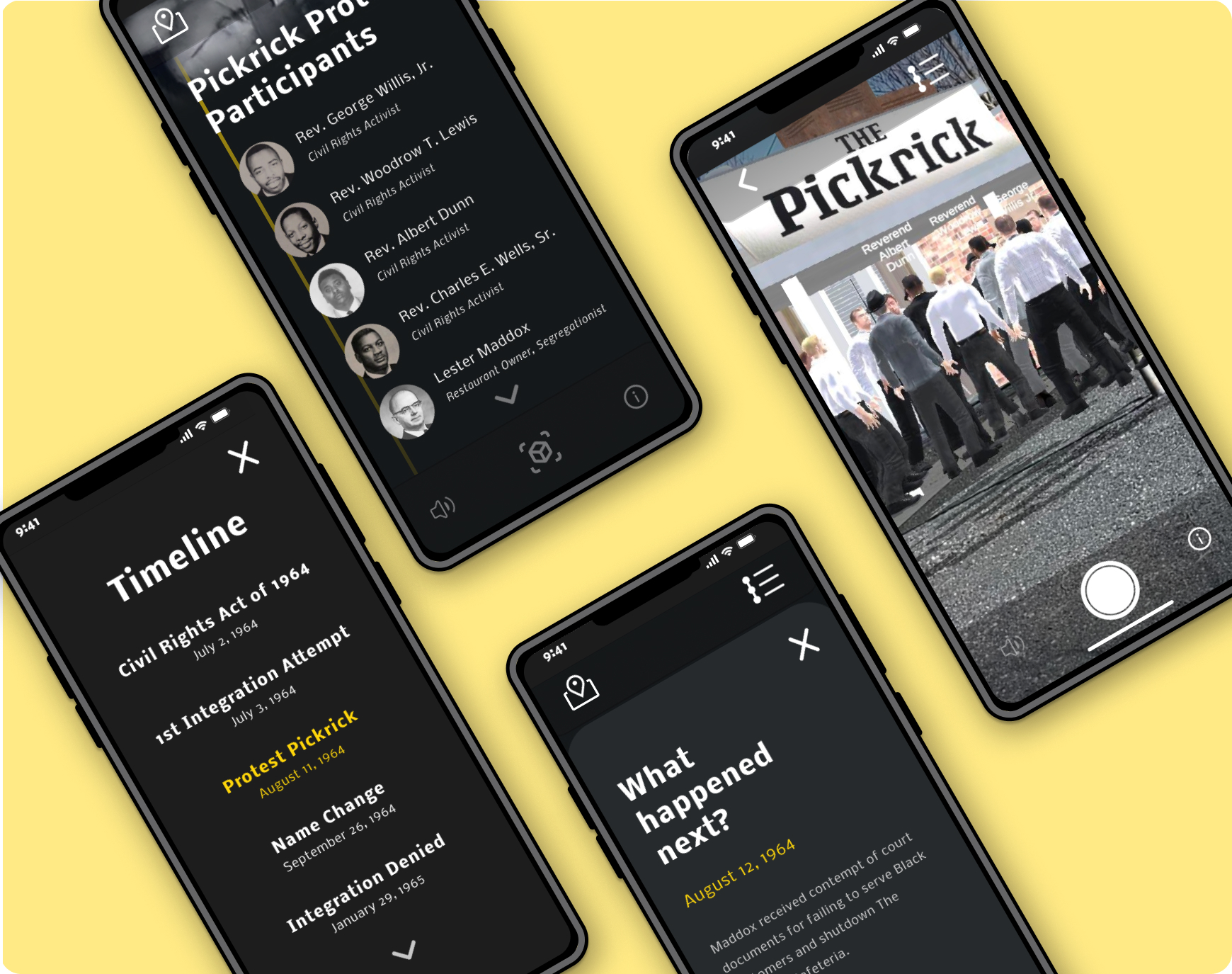 Check out more projects below.